I don’t watch much TV, but when I do I am selective and Mad Men is one show I love. It has an authentic feel, set in the advertising world of Sterling and Cooper of the 60’s and a captivating storyline. You actually learn quite a bit about the cut throat world of advertising, from this show. What I love also are the vintage dresses and decor.  The gorgeous January Jones is impressive as an ice princess grace kelly.  She is stunning in all those outfits as Jon Hamm is dapper in those suits. Jon Hamm as Don Draper is arguably the most handsome man on television.  It’s surprising to see that he is a comic genius as well appearing in skits on SNL and guest starring on 30 Rock.

The characters are all well fleshed out and deeply flawed, just like us, and that’s what lends authenticity to it.  The shows bring back the 60’s warts and all, exposing all its darkness, including rampant sexism, racism and every ‘ism you can think of.  It’s starkly politically incorrect like the 60’s were. I love how strong the female characters in the show are in the face of all that is against them and keep their heads held high through all their struggles.  And who doesn’t love Christina Hendricks – now that’s a real woman’s body which all women can cheer for.  Now that is what I term curvy, not the skinny models that Vogue labels curvy just because they are not stick thin.

It’s crazy how good-looking everyone in the cast is.  It’s like looking at eye candy.  The cast, the set, the dresses, even the men’s suits – everything looks like it’s out of a fashion spread.

The beautiful little girl who plays Don Draper’s daughter Sally is brilliant too.  She’s Kiernan Shipka and I think she’s a future star in the making.  Even children had a much harder time in the 60’s when emotions were suppressed.  It was a time when mothers smoke and drank while they were pregnant and around their kids, not realizing the harmful effect it would have.

It’s no wonder the show has won several Golden Globes and Emmys. 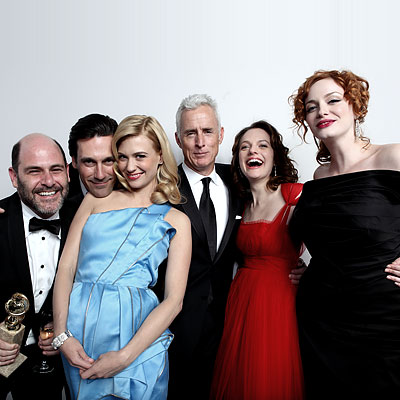 I had to add this last picture, because I love the baby blue dress worn by January Jones.

Blogging about life in Singapore helps me survive the mid-life crisis
View all posts by bookjunkie →
This entry was posted in My Celebrity Addiction and tagged Art, beautiful, beauty, Celebrities, culture, curvy, gorgeous, Life, Mad Men, TV. Bookmark the permalink.