World Cup 2010 Winner: Paul the Octopus vs Mani the Parakeet

My sister has been urging me to blog about Paul the English Octopus living in Germany, but my interest wasn’t piqued till I heard about our very own pundit in Singapore. Mani the parakeet who is owned by 84-year-old Fortune Teller in Little India just outside my favourite South Indian Vegetarian restaurant Komala Villas. 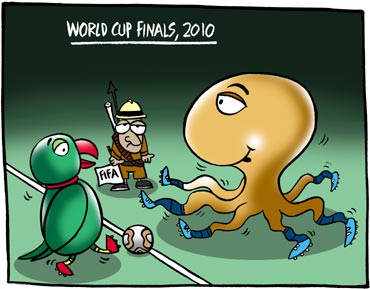 Mani the little bird has picked Holland, while Paul the Octopus has picked Spain to win the Cup. It’ll be interesting which animal will rein, come the Finals which will be telecast live at 2.30am on Monday. I wonder if I will be able to keep my eyes open. Spain has never reached the Finals before, and both countries have never won the World Cup, which just adds to the excitement.

I haven’t been watching the matches because it would have cost a ridiculous $90 to subscribe and so I decided to boycott. But now with Mani and Paul as part of the equation, my interest has been piqued. Paul has made 8 correct predictions so far, but I feel more loyal towards Mani. I love the underdog. Mani has only predicted the 4 winners of the quarter finals accurately. Let’s begin the battle of the animal oracles. Which hold more psychic power – the tentacle or the beak? This is just so ridiculously fun, I have to watch.

Meanwhile Paul the Octopus has received threats to be turned into sushi (yikes!) and other recipe suggestions, for picking Spain over Germany, earlier.

2 Responses to World Cup 2010 Winner: Paul the Octopus vs Mani the Parakeet