My Mum’s Olivetti: New Love For An Old Typewriter

My Apple iMac is gorgeous. I was yearning for it for years before I got it, and there is no question that I love it. But you know what? It’s been hurting my eyes. The backlight on the screen, even when dimmed is really bright. That’s when I asked my mum whether she still had her old typewriter. I was excited that she did and so we took it out and it looks almost as good as new (I just have to ignore a bit of natural rusting here and there). I thought this was be a great vintage decor piece. I hardly imagined the machine would be functional. But lo and behold, my mum inserted a ribbon and I put in a new sheet of paper and you can actually type on it! Actual words printed on paper. The feeling was beyond thrilling. Imagine the wonder of getting an instant photo from a Polaroid. It satisfied the part of me that needs instant gratification.

I think writers who suffer from writers’ block should try this manual device. Somehow I find the extra effort needed to hit the keys soothing and therapeutic. It was like gardening. A manual labour of love that would produce sweet fruit. There is something about the physical effort of imprinting your mental thoughts down on paper. Also you have to be more careful with your words, because corrections are a hassle. It forces you to produce higher quality stuff. 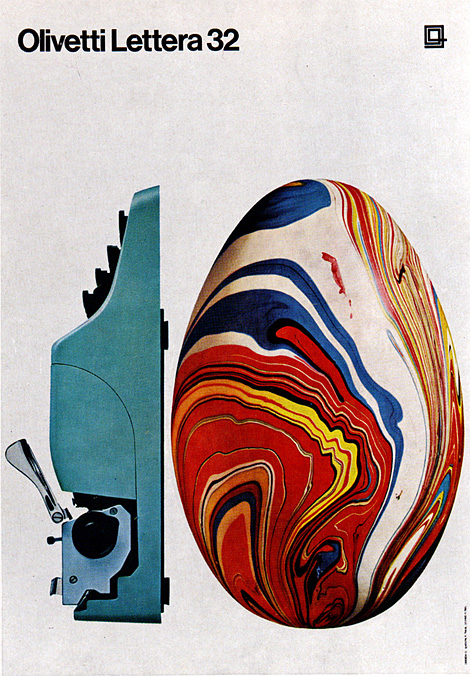 This wonderous machine is called the Olivetti Lettera 32. The name itself rolls off your tongue. I searched the advert on google and found this really cool one. It was lauded for being really small and stylish for the times, and was probably coveted the same way the iPad is. It’s quite a thing of beauty. I’m sure, even them. It sold for US$83, with the price later dropping to US$68. Today, with our newfound love for all things retro, a second-hand one in good condition costs at least US$350. I was thinking if that included shipping from the US it could cost a whopping $800 Singapore dollars! Well perhaps it’s not so expensive, considering the new highest capacity (60gb) iPad that will be launched in Singapore this Friday costs S$1228

The Olivetti 32 (a portable upgrade) was designed in 1963 by Marcello Nizzoli (1887 – 1969). My dad probably bought it in the mid 60’s and used it in his first writing and editing job. It is part of the reason why I love to write – my wanting to be like him, but also genuinely loving the written word.

My mum went to actual Secretarial school aka ‘Mad Men’. She actually wore outfits similar to those on the show, and was an excellent typist using the traditional ASDF method which I tried to learn but for the life of me couldn’t. Blowing my own trumpet, I am proud to declare that I can type really fast using my own method of just knowing where the keys are. I can hear my father saying, ‘Self praise is no praise’. He always kept us so grounded and taught us the importance of humility. It’s harder when he’s not around to check us.

In my first job I met a secretary who impressed the socks off me. The speed at which she typed reminded me of a machine gun firing off. It was like watching an artist at work. There is a refined elegance about fingers pounding away at a typewriter that is so mesmerizing. I am never fascinated watching people typing on computers, no matter how fast. It think it’s the rat-a-tat hypnotic sounds of the typewriter that I weirdly find soothing. It might have something to do with playing with our toys, under the table with my sister when we were toddlers as my mum or dad were busy with their typing. The typewriter had this correcting fluid that was pink and we used to apply it to our nails as nail polish! You may be horrified now, but it was the carefree 70’s. Parents didn’t bother too much about whether stuff was toxic or not. We also loved jabbing at the keys and that’s how we learnt out alphabets.

I took some photos of the Olivetti Lettera 32 which is a beautiful dusty turquoise with elegant black keys. Typing on it reminds me so much of playing on the piano. It actually works in a similar way too, if you have opened up the case of the piano and peered inside. Each time you hit a key, the hammer attached to it hits the strings tuned to that certain note. When you hit typewriter, in a similar fashion, you have carbon being imprinted on paper.

Perhaps when the typewriter was first invented, some older folk may have felt the same dismay we feel with too much Facebook, Twitter, email and computer dependance. Perhaps they thought the art of fine penmanship would be lost and they were right – you should see the atrocious handwriting of kids these days.

A hundred years from now, the iPad will be replaced and probably have a similar revered status. Can you imagine people feeling nostalgic about the then obsolete iPad? By then the typewriter would be too far back in history and relegated to the museums or only used in period movies, like the prop of a quill pen dipped in ink. I think that’s why I love the show Mad Men so much. It’s so authentic to the era of the 60’s. It allows the younger audience to get a glimpse of an era with typing pools, when you were pampered by the group of ladies, where you would not need to type up your own stuff. Secretaries actually took dictation then and all you needed to do was rattle off.

When I asked my mum if she misses the typewriter, I did not get the answer I expected. I thought she would wax lyrical about it, but she recalls struggling with correcting mistakes and the hassle of using correcting fluid. She prefers the ease of the computer!