Well 24 year old Anchal Joseph is 8 months older, but still. They were both born in 1987. If I were the daughter I would freak out, but I am suspecting Jane Carrey is very open minded, unlike conservative old me. 49 year old Jim Carrey is more than double her age.

Being Indian, it’s good to know that Jim Carrey doesn’t discriminate though. It seems a bit odd as he recently got in hot soup with Hindus for mocking the Lord Ganesha in a skit on SNL, which I found in bad taste too. I wonder if this is an image thing.

Anchal was a contestant on America’s Next Top Model which my cousin watches, but which I stopped watching after the first season as I was too irritated with Tyra Banks bullying the girls. Anchal’s family came to Florida from New Delhi when she was just six.

I am a fan of Jim and I thought his spoof of the Black Swan on SNL was just brilliant. Anyway this story was reported in People, the most conservative tabloid, so it must be true. 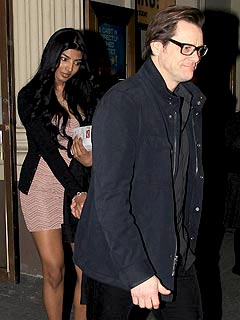 Here’s a better photo of Anchal at Contact Music: A photo of Jim, his daughter Jane and his ex Jenny McCarthy who dumped him recently as she couldn’t handle his depression I think.