……I am fortunate enough never to have been tempted by the lure of easy riches. I never had to walk miles to school but only to the end of the driveway to be picked up by a school bus. I never had to do my own chores as a toddler because there was a domestic worker to do so. I always had more than Maggie noodles to enliven my rice. But Vui Kong didn’t. Living in a shantytown, his mother eking out an existence close to the very threshold of human misery, who knows what desperation prompted him to do what he did, if indeed he knew what it was he was doing? Who indeed. But our mandatory death penalty takes the just and careful consideration of these matters out of the hands of our judges. Our law says that where you are convicted of a crime for which the penalty is mandatory execution, the judge is not entitled to look at the convicted person as a human being, with faults and failing that occasion crime but also strengths and goodness that can give rise to reformation, to rehabilitation……

What Dr Vincent Wijeysingha expressed, can be applied to myself as well. I am not as eloquent or articulate so I am glad there are people like him to air our views. I am just lucky that I have had a cushy existence, a wonderful childhood, in comparison to the now 23 year old Vui Kong. Read the full letter here. It’s haunting and unbearable to think of what happens if Vui Kong does not get a pardon.

It just makes me have even greater respect for the candidate from the Singapore Democrats Party which is also known as SDP. A friend of mine was taught by the founder of the party, Dr Chee, in the National University of Singapore (NUS) and she recalls that he was one of the nicest and kindest lecturers around. He taught Psychology. He truly cared about the students and his door was literally open for them. I am quite taken in by his passion and all that he has sacrificed.

To the question of whether the SDP just made up of angry people, as perceived by certain members of the public, Dr Chee said, “What’s wrong with Singaporeans being angry? You see the way society is being handled and cheap foreign labour is being brought here to displace locals so that young people can’t find a job and if they do find a job, they get paid amounts that they cannot survive on, whereas your foreign workers can.” He contrasted the poor in Singapore who struggled to make ends meet, with “ junior ministers getting paid a hundred thousand dollars a month.” Dr Chee stressed that the way to express “anger” is by becoming passionate, in a non-violent manner. “Get passionate about issues that involve you,” he says, “because this is our country! We need to feel that before we can want to be something more.”

Very few people see him as a father so I like this photo of him with his children. 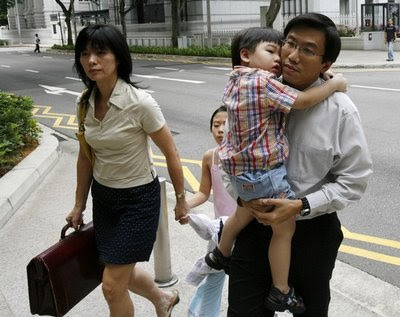 I have never paid as much attention to the elections as I have this year. When I was younger I was pretty much apathetic as I felt it was all beyond me and I never got a chance to vote anyway. I was happy going about my carefree existence. It seems to be the same for the Singaporeans around me. Perhaps we are just tired of the overly strict stifling ways and are yearning for a more compassionate Singapore where people are given a second chance.

If someone were to ask me what it means to be Singaporean, I think having a voice that is heard would be key thing in having a strong sense of belonging.

When I worked in a Corporation, I learnt that if all instruction was top down, it was not as effective as when decisions were a negotiated collaborative effort. That was why in a good organisation there were 360 degree performance reviews and employee surveys that were actually reviewed with action taken.

Also a boss I had at an MNC, told me that the boss is never always right and that fear within the organization is not healthy. If we see the boss doing something wrong we must be able to be fearless enough to stick to our values and point it out. I think I could truly only work for a company that allows me to stick to my morals and not be penalized for it.

I would not be able to sleep at night if I went against my basic understanding of what is right. I cannot abide by being a suck up or a yes woman which the bad work places I had the misfortune to work at was filled with. To me that is no better than being a robot.

Sorry for the digression, scattered thoughts, and my rant. But since a blog is a great place to vent, I am venting.