Books: Salman Rushdie’s Luka and the Fire of Life

I wanted so much to like this book and I actually found it pleasing from the onstart, but somehow I found myself skimming through in the middle. This is after all a book for children that is meant to appeal to adults as well. The part I found charming is that Rushdie is very much expressing is love for his son through this book. The affection between father and son in the book touched me. The son’s anxiety about his father’s mortality is also something I could strongly relate to. This book was written by Salman for his younger son Milan who was 12 at the time and is 13 in the video below. I wonder how reading the book must have affected him. He must be very mature to be able to handle this serious theme.

Milan whose middle name is Luka is a very good-looking boy, and he seems to be a very well-mannered and well brought up boy and obviously very close to his dad. The part of the book that disturbed me is the theme of parental mortality. It made me wonder how it must be for a young child with a much older parent. How these worries about losing their parents, due to the simple fact of age, must plague them. Although having young parents does not assure you that they will always be around, as life is just unpredictable and I must say cruel at times.

Another aspect of the book I found charming and very inventive was the use of computer games as a metaphor. I thought it was lovely and wonderfully indulgent of a father to praise this imaginative part of his son’s modern childhood, instead of squashing it as a waste of time.

Perhaps I just needed to be a little more patient with this book, as the quest story in the middle is to appease the child reader.

If you are a fan of Rusdie you will very much enjoy this interview where his younger son Milan joins him.
[youtube=http://www.youtube.com/watch?v=S227lB1LwLs]

And it’s really sweet when a father writes a book specially for his child.
[youtube=http://www.youtube.com/watch?v=TBt8oA6-V4M] 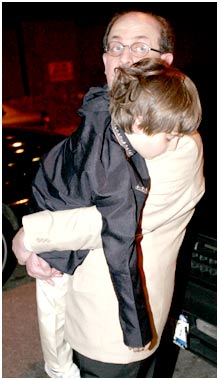 Apart from the Fatwa, I can’t imagine what it’s like having children 18 years apart. Salman and both his sons Zafar and Milan are all coincidentally, Geminis. The boys have different mothers but they look remarkably alike.