I found this interview so sweet and funny. It looks like Suri really has the upper hand, but I do agree that kids should not be forced.  Tom and Katie seem like wonderfully doting parents who take the time to explain things to their kids.  He seems to have a really great relationship with his older kids, Isabella and Conner too.

In a recent interview with the Philippine Daily Inquirer, Tom revealed some cute things:

“I’ve always believed that if a child wants to wear something … if Connor, Bella and Suri just want to be in their pajamas, that’s fine.”

Laughing, Tom said, “I don’t know what to say. Anyone who’s a parent knows – why have that discussion? It’s like, ‘Great, you dress yourself.’ I think it’s a wonderful, creative self-expression. Suri does that.”

Then he revealed: “And she’ll pick out clothes for me to wear. She will go through my wardrobe. She will lay my clothes and shoes out. She’s just so sweet.”

This is a funny picture and I just had to include it.  It shows Suri in charge. 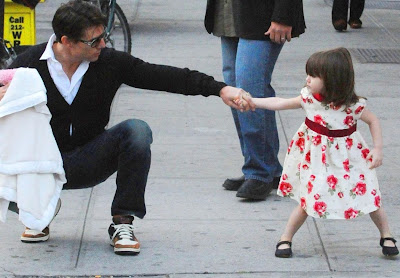 In an interview with America’s Esquire magazine Tom said:

“I remember that first night, just staring at Bella. I was checking her every second, just looking at her, feeling that immediate bond. I was probably looking at her so much that I was keeping her up.

“I made a promise to her – all I can do is the best I can. But I’m not going to say I’m gonna do something and then not do it.”

In an Interview with Oprah Tom talked about 17 year old Bella dating, Suri telling him what to wear, and his life at home:

“Bella has a very strong sense of herself,” Tom says. “She’s a good girl, so whoever she likes, it’s cool.”

“Whatever she wants to wear, she wears it. I’m not going to tell her different,” Tom says. “She’s got great taste too. She tells me what to wear.”

About Life at Home:

“Saturday night we have dinner, and then it’s games. We play Quick Scrabble, and then it’s usually movie night. We spend the whole night figuring out what movies we want to see.”