I wasn’t planning to write about the Oscars because I missed the show, but since Sister Earth Organics requested it, I was inspired to seek out what the pretty ladies of Hollywood wore today. The reason why I missed the show was because it was not shown on the local channel 5 as it’s shown every year. It was only telecast on Star Movies which is a channel you need to subscribe to, and I had no idea. I wonder if I am the only one disappointed this year.

Luckily, there’s the internet, so I still get to check out what I missed and the main part of what I missed would be the red carpet gowns.

Young actress Hailee Steinfeld was sweetly age appropriate in her Oscar dress which looked like what a ballerina would wear. It’s by Marchesa.

I like Amy Adam’s demure electric blue gown that reminded me of a cheongsam. It was by L’Wren Scott and she also wore 1.35 million dollars worth of emerald and diamond Cartier jewels.

I loved the Lilac Eli Saab dress that Mila Kunis wore. So pretty.

I think I’m just a big fan of Eli Saab. I prefer what Harry Berry wore to an earlier even than the Oscars. Don’t you think this red gown she wore to the Costume Designers’ Guild Awards is just so much more beautiful? Halle Berry wore a nude Marchesa to the Oscars. It’s hard to imagine she’s 44 when she looks more stunning than 20 year olds.

I thought Penelope Cruz looked stunning, having just given birth to her son a month ago. She has that radiant glow about her. As one of the hosts of the show, Ann Hathaway had 7 dresses, but the black one with the turtle neck was my favourite. You can see the rest at People Magazine. 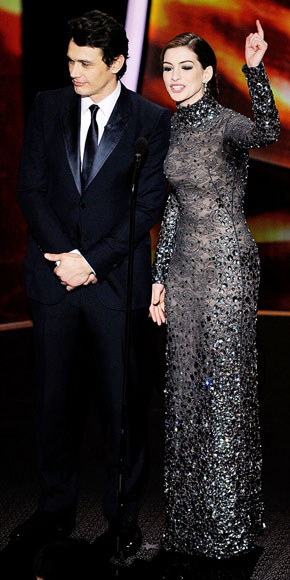 I have no idea who Jennifer Lawrence is (I have yet to watch Winter’s Bone), but she somehow managed to make the simple Calvin Klein gown look captivating. It was the red plus her hour glass figure I think. I somehow preferred the back of Cate Blanchett’s dress to the front which seems to conservative. 4 Responses to 83rd Academy Awards: The Oscar Dresses I Liked